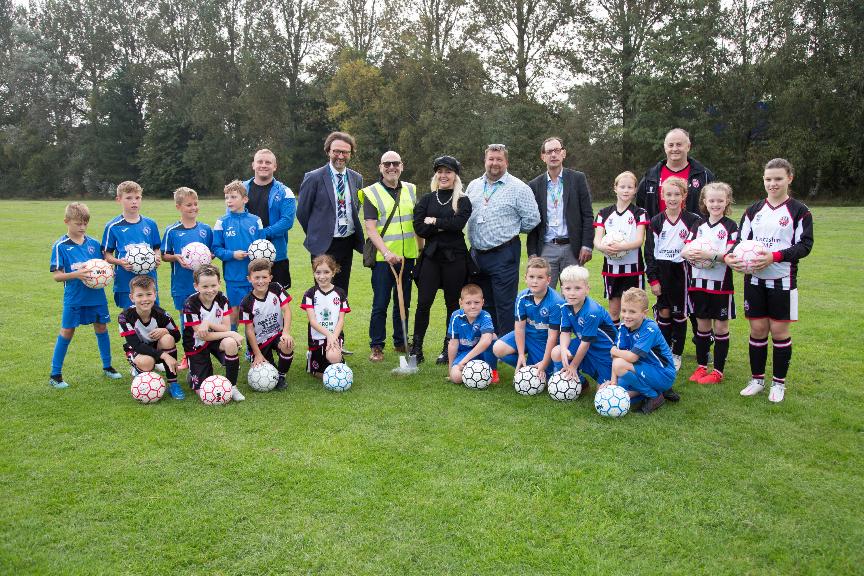 The Leyland-born freestyler - in her first assignment as an ambassador to the UK's largest sports charity - will advise on the development of the new £2.6m South Ribble Playing Pitch Hub at Bamber Bridge Leisure Centre.

Liv, 22, is a five-time world record holder who in 2017 became the youngest-ever freestyle football world champion.

She has gone on to become a social media star thanks to her stunning soccer skills, regularly wowing her 6 million online followers with her incredible and imaginative ball control tricks.

Liv has also forged a TV career as a presenter for BBC Sport as well as becoming an official ambassador to both UEFA and, now, the Football Foundation - which channels funding from the Premier League, The FA and the Government into grassroots facilities across the UK.

The Football Foundation has supported the creation of the new Playing Pitch Hub with a grant of more than £800,000 and, through Liv, will now work with site developers on various technical and design elements to deliver a best-in-class facility for lovers of the beautiful game.

Liv and the Football Foundation will also help the Council shape its strategy to engage with the local community - with a particular focus on women's and girls' football ahead of the UEFA Women's Euro 2022 tournament in England next summer.

Councillor Mick Titherington, Deputy Leader of South Ribble Borough Council and Cabinet Member for Health and Wellbeing, said: "We're incredibly proud of Liv's achievements in the world of freestyle football and are absolutely delighted to be working with her on this magnificent new development.

"The creation of the South Ribble Playing Pitch Hub is a key element of our 'More People, More Active' strategy, which aims to get more adults and children to participate in sport. At the heart of this strategy is the determination to provide the very best facilities for our residents.

"The Playing Pitch Hub represents a major investment by the Council, so it's important we get it absolutely right. By teaming with the Football Foundation and their new official Football Foundation Fan Liv Cooke, we are on track to deliver a world class local facility approved and endorsed by a world champion local sports star.

"Naturally, Liv's profile - particularly among young people - will help us engage with as many people as possible, to spread the news of this wonderful new asset. However, she will also play an important and active role over the coming months as we turn our exciting vision into reality.

"We can't wait for this facility to be open and available for use by the Liv Cookes of tomorrow."

On Thursday (9 September), Liv and Cllr Titherington were joined by representatives of both the Football Foundation and the Lancashire FA for a guided tour of the site as the construction team prepares to begin work on the highly-anticipated project, due for completion in Spring 2022.

Boys and girls from Lostock Hall JFC and Bamber Bridge United JFC - two of the many local clubs set to benefit from the arrival of the new facility - were also invited along to celebrate the new link-up.

Using jumpers for goalposts, the youngsters enjoyed a friendly game of five-a-side on the open field that will soon be transformed into a top-class focal point for football with the installation of two full-sized 3G artificial pitches and a fully-accessible single storey sports pavilion with changing rooms.

Liv, who has close family ties to Bamber Bridge, also treated the two teams to a skills masterclass to pass on a few of her nifty tricks.

Liv Cooke said: "It's an absolute honour to have been asked to become an official Football Foundation Fan. I have been fortunate enough to have benefitted from some great facilities over the years and, as a result, have seen first-hand just how important they are.

"Football gave me confidence, life-long friends and endless hours of joy and I believe everybody should have access to enjoy this beautiful game that changed my life.

"So many women and girls will have felt inspired by the Euros but struggled to find a route into the game. Football truly is a sport for all and I am here to show everyone that, no matter your background, your dreams can come true.

"It was great to meet players from Bamber Bridge United JFC and Lostock Hall JFC who will benefit from the great pitches once the site is finished! I hope that working together on this new facility, which is only 10 minutes from where I grew up, is just the beginning of a long and impactful partnership and I cannot wait to get started."

The South Ribble Playing Pitch Hub is being created to meet rising demand for good quality pitches. There are already some 244 football teams playing on formal pitches in the borough - including 48 adult teams, 60 youth teams and 136 mini-mixed teams. However, there are currently only five full-sized artificial pitches in the borough and only two available on weekends

The opening of the Playing Pitch Hub will enable clubs to establish more teams and grow their participation numbers - particularly among girls and people with disabilities.

"This project is a great example of what can be achieved when a local authority works with the Football Foundation, alongside people like Liv who are passionate about improving grassroots facilities.

"Thanks to the investment of the Premier League, The FA and Sport England, better grassroots football facilities are having a transformative impact on people's physical and mental health, bringing communities together and benefiting local economies across England.

"As we gear up towards hosting the UEFA Women's Euro 2022 tournament in England, our work with Liv and the delivery of this new facility provides a landmark moment where we can truly capitalise on the passion for our national game, encouraging more girls and women to take up the sport."