We want your feedback!
Please send us your thoughts on our new-look site. Click here to fill in a survey. 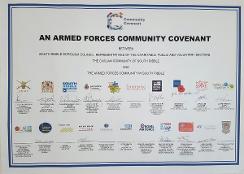 It is South Ribble's expression, at a local community level, of the National Armed Forces Covenant, which outlines the moral obligation between the Nation, the Government and the Armed Forces.

For South Ribble Borough Council and members of the Local Strategic Partnership, the Community Covenant presents an opportunity provide help and advice to members of the Armed Forces Community.

South Ribble Borough Council is aware of the unique challenges that are faced by people leaving the armed forces. These can be practical things, like understanding how to manage bills or finding a job. They can also be emotional - like dealing with post-traumatic stress.

It is not about preferential treatment. It is about removing disadvantage and ensuring fairness for our Forces Community by promoting equality of opportunity in access to local services.

The Armed Forces Community Covenant also provides a focus for continued recognition of the debt of gratitude our community owes service personnel, reservists, veterans and their families.

The Armed Forces Community Covenant was signed at South Ribble Civic Centre on the 11th November 2012.