Moss Side Playground in Leyland officially opened after major refurbishment

The recently refurbished playground on Dunkirk Lane has officially opened to the public after a £175,000 investment. 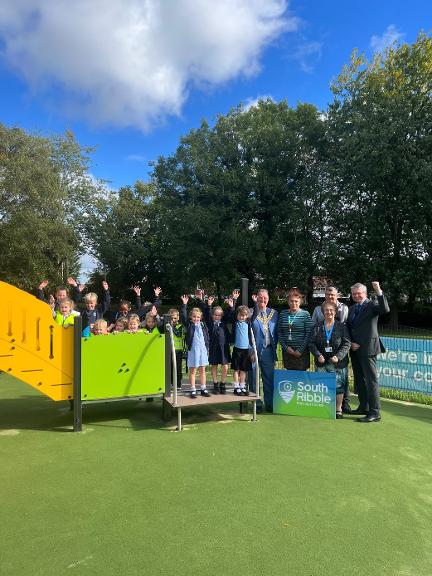 The Mayor of South Ribble, Councillor David Howarth along with ward members and other local Councillors joined children from Poplars Nursery and pupils from Moss Side Primary School to officially open the playground to the public.

The project has been one of the many refurbishment projects from South Ribble Borough Council as part of their substantial £2.4 million investment into parks and open spaces in the borough.

Leader of South Ribble Borough Council, Councillor Paul Foster said: "We are delighted to have officially opened Moss Side Playground for all residents and visitors of South Ribble to enjoy.

"We know this facility, like all of them, will be well used and appreciated by the many visitors that use these fabulous developments every day".

The brand-new equipment is aimed at toddlers (ages 2 - 6) and juniors (ages 7 - 12) and was chosen based on responses from a consultation held to ask South Ribble residents what they wanted to see on the playground.

Councillor Paul Foster continued: "It is so important that we give children safe places to go outdoors, explore and be active, whilst having fun and I encourage everyone from the borough to come along and try out this amazing playground".

The refurbishment took South Ribble Borough Council eight weeks to complete after last being refurbished in 2005 with only toddler equipment.  Visitors can now enjoy swings, roundabouts, seesaws, multi climbers and slides on Moss Side Playground.