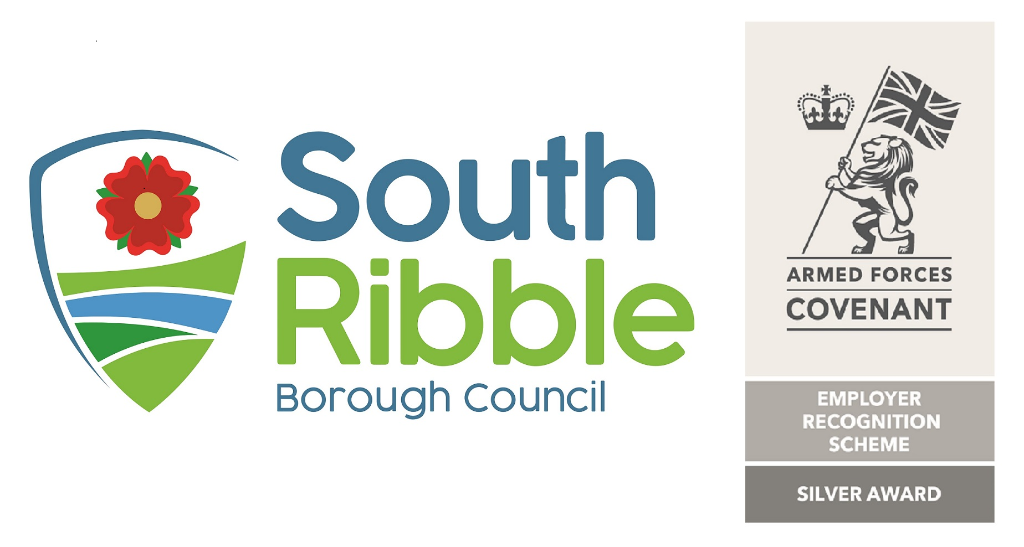 South Ribble Borough Council's unwavering commitment to the local Armed Forces community has been underlined by the Ministry of Defence - with the Council retaining the prestigious Silver Award in the Defence Employer Recognition Scheme (ERS).

The ERS recognises employers who support members of the Armed Forces community and their families, and inspire others to do the same. This includes employing current and former service personnel, and demonstrating flexibility to allow Reservists and Cadet Force Adult Volunteers to meet their commitments in uniform.

All award recipients must also have signed the Armed Forces Covenant - a pledge to acknowledge and understand that those who serve or who have served in the military, and their families, should be treated with fairness and respect.

The Council first earned a Silver Award in 2016, and is one of just 36 organisations from across the North West to have done so for 2021.

Cllr Paul Foster, Leader of South Ribble Borough Council, said: "Having served in the British Army for 15 years I personally understand the challenges that being a member of the Armed Forces brings. It's a job like no other, and the brave men and women deserve all the support we can give them, as do their dedicated families.

"It's great news then that our firm commitment to South Ribble's Armed Forces community has been revalidated by the Ministry of Defence. This Council clearly recognises the incredible sacrifices made by service personnel and their families to keep our country safe, and it is only right that we do our utmost to support them both during and after their time in uniform.

"As an employer, we're proud of the dedication of Council staff who combine their careers with their Armed Forces responsibilities; and more generally - through the Armed Forces Covenant - we vow to ensure those who serve or have served, and their families, receive the respect and support they deserve."

The South Ribble Armed Forces Covenant pledges that no member of the Armed Forces community should face disadvantage in the provision of public and commercial services compared to any other citizen. It also recognises that, in some circumstances, special treatment may be appropriate - especially for the injured or bereaved.

The Covenant focuses on four key areas of support for active and former servicemen and women: family life, skills and employment, housing and health.

Serving Reservists and Cadet Force Adult Volunteers also benefit from an up to 10 days additional paid annual leave, enabling them to attend important training camps without sacrificing precious time off with their families, and are supported to answer the call in the event of being needed for active duty.

In addition, the Council is committed to providing support for the spouses and partners of Reservists and members of the regular Armed Forces at times of deployment, injury or bereavement.

Cllr Derek Forrest, the Council's Armed Forces Champion, said: "The Armed Forces Covenant is not about preferential treatment, it is about ensuring equality of opportunity for our Armed Forces community by working to remove some of the unique obstacles they can face as a result of their service.

"This Silver Award from the Ministry of Defence also highlights how, as a Council, we place great value upon the skills, expertise and experience of service personnel, who continue to contribute so much to our community long after their military careers are over."

The charitable foundations of Premier League football clubs Everton and Burnley are among the other North West organisations to receive a Silver Award for 2021, while other recipients in the region include the Lancashire Constabulary, Manchester Metropolitan University and Sellafield.

Commenting on the announcement of this year's Employer Recognition Scheme Silver Awards, Minister for Defence People and Veterans, Leo Docherty MP, said: "I would like to thank all the organisations who have proven their support for the Defence community during such unprecedented and challenging times.

"The vast range of those recognised this year demonstrates how employing the Armed Forces community makes a truly positive and beneficial impact for all employers, regardless of size, sector or location."

Vicky Doran, Regional Employer Engagement Director at the North West of England and the Isle of Man Reserve Forces' and Cadets' Association (NW RFCA), added: "On behalf of the Ministry of Defence we are honoured to be able to recognise the support and commitment given to the Armed Forces Covenant by employers in the region, through the Employer Recognition Scheme awards.

"Each recipient has demonstrated not only that they support the Covenant and the Armed Forces community, but also that they are prepared to support their Reservists, Service Leavers, Veterans and Cadet Force Adult Volunteers in the workplace."

More information about the South Ribble Armed Forces Covenant is available at southribble.gov.uk/armedforces.